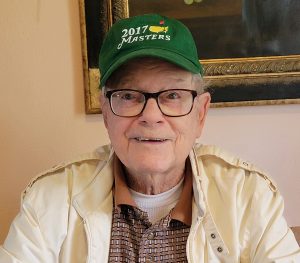 He was born November 2, 1929, in Bath County, Virginia, the son of the late Dallas Albda May and Anna Pauline Andrews May.

Mr. May worked at the Homestead Garage for many years. Later, he worked at Hercules Corporation in Covington, Virginia where he retired as a Slitter in the film finishing area.

He was a member of Virginia Chapel United Methodist Church, and a former member of the Hot Springs Moose Lodge. He never met a stranger; he was a friend to all. He enjoyed hunting, fishing, and was an animal lover, especially cats. Mr. May enjoyed golfing with Burley Chestnut, Ernie Lyle, and the Marlington Golfers Group. In younger days he would take his children and the “Bacova Kids” in the back of his truck to Backcreek to go swimming. He loved baseball and played for the Hot Springs Indians. It was here that he earned his nickname “Skeeter” because he was so fast that he was always put in the game to steal bases. He enjoyed horse racing and playing the gaming machines with his daughter, Terry, and his niece Tammy Cook. He was a loving father, grandfather and great grandfather.

He was married to the late Shirley Anne Cook May who preceded him in death on October 29, 2016.

In addition to his parents and wife, he was preceded in death by a son, Larry Milton May; a brother, Walker Lewis May; a sister, Virginia Strasser; an infant brother, Dallas Alvon May, Jr.; an infant sister, Maxine May.

A memorial celebration will be conducted at a later date.