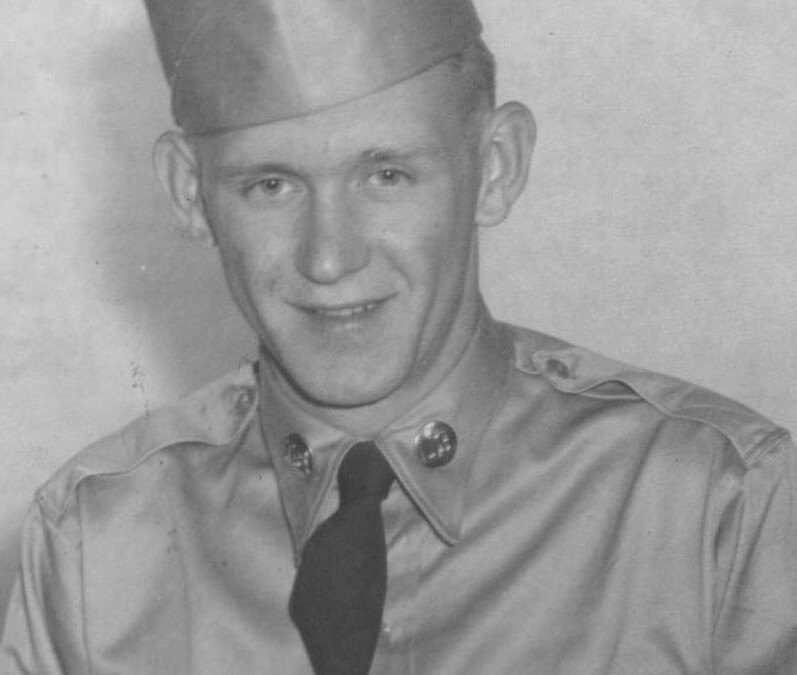 Aubrey G. Williams, 78, formerly of Gaithersburg, Maryland, passed away on February 26 at the Golden Living Nursing Home in Clifton Forge, Virginia.
Born on November 25, 1933, Aubrey was the son of the late Simon P. Williams and Mabel Hodge Williams. He grew up in Warm Springs and was a graduate of the Valley High School class of 1952.
Mr. Williams served in the U.S. Army as a corporal during the Korean War and, after returning home, worked for Bowman Brothers feed store in Gaithersburg, eventually opening his own store, Williams Feed and Supply. After retiring from that business in 1980, he invested in the Germantown Country Club, where he enjoyed many years of golf and friendship. In addition, Mr. Williams was an avid organizer of the annual Gaithersburg Open golf tournament, enjoyed writing, football, basketball, the outdoors, and never met a crossword puzzle that he could not conquer.
In December, 2010, Mr. Williams, ‘Grandad,’ moved to Pennsylvania to live with his daughter Cindy, her husband, and their eight children. It was a blessed time for all. During his stay at the nursing home, he was tenderly cared for by the staff, hospice nurses, and especially his brother Roy and his sister Opal, who made sure he went out nearly every day. His greatest joy in his last days may very well have been Nancy’s (Roy’s wife) cooking, as he could not say enough good things about it. Daily phone calls and weekly visits from Jim and Judy Faye of Martinsburg, West Virginia, his brother Dennis and wife Ann, his sister Linda, and many other friends and relatives, helped a formerly very active man pass the time enjoyably.
He is survived by two children, David Berry Williams and wife Janell of Monrovia, Maryland, Cynthia Marie Simpson and husband Randy of Fairfield, Pennsylvania; twelve grandchildren, John Kaeser and wife Jenn, Brian Kaeser, Taryn Williams, Kara Williams, Matthew Simpson, Taylor Simpson, Clair Talcott and husband Matthew, Jillian Simpson, Zachary Simpson, Andrew Simpson, Amy Simpson, Melody Simpson, and three great grandchildren, Morgan Tunney, Diana Grace Kaeser, and Baby Talcott, due in October.
Also, Mr. Williams is survived by four brothers, James Arnold Williams and wife Vaneda of Clarksville, Tennessee, Frankie Williams of Sweden, Roy S. Williams and wife Nancy of Hot Springs, and Dennis Williams and wife Ann of Bedford, Virginia; three sisters, Opal Gazzola of Hot Springs, Linda Stoneham of Warm Springs, and Twila Lee and husband Jim of Harrisonburg; and former wife, Gracie Berry Williams of Gaithersburg, Maryland.
He was preceded in death by a daughter, Diana Lyn Kaeser, two brothers, Leo S. Williams and Carl H. Williams, Sr. and two sisters, Vada Lipscomb and Alma Stevenson.
A funeral service will be conducted at 12:00 p.m., Thursday, March 1, 2012 at McLaughlin and Young Funeral Home in Hot Springs, Virginia with Pastors Steve Shaver and Gary Cox officiating. Interment will be in the Warm Springs Cemetery. Pallbearers and Honorary Pallbearers will be Mr. Williams’ grandchildren. The family will receive friends one hour prior to services from 11:00 a.m. to 12:00 p.m.
Memorial contributions may be made to Mt. Regional Hospice, P.O. Box 637, Clifton Forge, Virginia 24422.