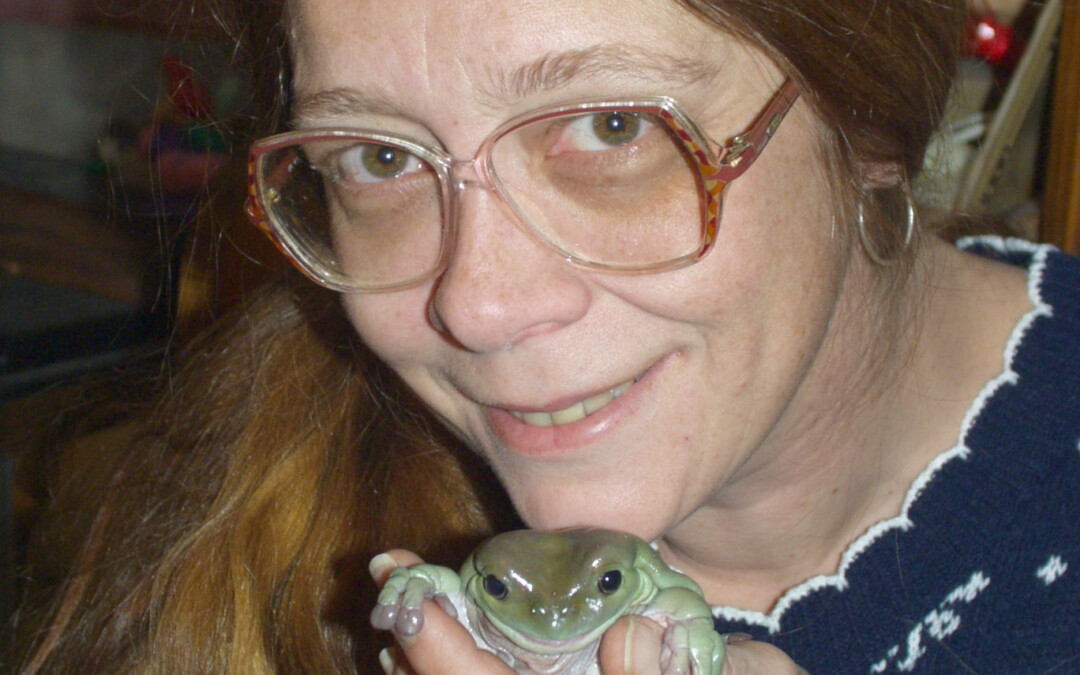 Karen Marie Cobb, 58, of Hot Springs, VA, passed away peacefully in her sleep on October 10, 2019, at home with a lifelong friend and her beloved cat, Levon, by her side. Karen had suffered many years of declining health and is now in peace.

Karen was born in Arlington Hospital in Arlington, VA, to Ralph Bonner Cobb and Gloria Kurze Cobb. Her father was the proprietor of Cobb’s Gulf Service Station at 14th and L Streets in Washington, DC. She joined her older brothers Gary and Richard on October 24, 1960. She was educated in the Arlington County public school attending Tuckahoe Elementary School, Swanson Middle School and graduated high school from the Alternative HB Woodlawn Program in 1979 where she became fluent in German and was named class valedictorian. She later attended the University of Virginia in Charlottesville, VA; Virginia Polytechnical Institute and State University in Blacksburg, VA; and the College of the Atlantic in Bar Harbor, ME.

Karen had an inquiring mind and had many interests during her lifetime including calligraphy, carding and spinning wool, jewelry making, gardening, antiques, American and European history, ecology and genealogy.   She enjoyed visiting Germany; the Maine Coast; Berkeley, CA; New Orleans, LA; and Santa Fe, NM.  She was an avid collector and collected may genres of art including Caribbean, Creole, American southwest and pre-20th century objects and art. She had a particular interest in objects from America and Britain from the Victorian era and collected Victorian-era jewelry, mourning jewelry and other mourning-related items. She also collected hats, clothes and jewelry from her other favorite era, the glamorous American Hollywood period of the 1930s and 40s, and anything related to Christmas. She loved the holidays and believed one could never over decorate or over dress for Christmas! She even left her Christmas trees up all year.  She was a voracious reader who collected and read many books.

Karen joined the Catholic Church as an adult and was a parishioner of the Shrine of the Sacred Heart in Hot Springs. She enjoyed collecting antique religious and church-related objects, icons and art works. Karen loved all animals (with the exception of snakes!) but especially her beloved childhood lamb, Rosie and her childhood dachshund, Brownie. She developed an early interest and had a special love for cats. She adopted many special-needs and disabled rescue cats from shelters in the mid-Atlantic states.  She also loved frogs and had many pet frogs, including Elvis, who she raised from a baby and who lived for many years.

Karen was a lifelong fan of the Grateful Dead and attended many hundreds of dead shows, primarily on the east and west coasts, until the death of band leader Jerry Garcia in 1995. She enjoyed music of all kinds including rock and roll and the singer-songwriter artists from the 60s and 70s, early rhythm and blues and folk music from the British Isles, the Canadian Maritime provinces and the United States. She had an early interest in bluegrass and early American country music as well.

Karen was interested in her family history and genealogy. Her maternal grandfather emigrated from Germany in the early 20th century and settled in New Athens, IL, birthplace of her grandmother Hilda “Gladda” Kurze.  The family later relocated to Maryland in the Washington D.C. suburbs. Her paternal grandparents settled on a farm in Little Valley, Bolar, VA, in Bath County, which has remained in the Cobb family for well over a century. During her childhood in the Washington D.C. suburbs she spent many happy days and summers on the Cobb Family farm “down home” with her relatives in Little Valley, where the family enjoyed relaxing in the old Bolar pools. After residing in Falls Church, VA, working in the hospitality industry for many years and later as the executive assistant to the CEO of the CEL-SCI Corporation in McLean, VA, she relocated to Hot Springs in 2007, returning to her roots in the Allegheny Highlands.

Karen is predeceased by her beloved maternal grandparents, Walter and “Gladda” Kurze, and her beloved paternal grandparents, John and Zella Cobb, her father Ralph Bonner Cobb, her beloved uncles Elmo Cobb and Bill Smith and her beloved aunts Reavis “Ree-re” and Laura Francis Cobb. Karen is survived by her paternal special aunt Katie Smith and many Cobb-family cousins and distant relatives in the Allegheny Highland area.  Karen is survived by her special, dear and precious mother, Gloria Kurze Cobb of Blacksburg, VA, and her brother Gary Cobb and is family of Little Valley, Bolar, VA, and Surf City, NC, and her brother and his wife, Richard and Jean Cobb of Blacksburg, VA. Also surviving are maternal cousin, Jean Jaques Fournier and his daughters of Toronto, Canada. She is survived by many, many loving friends she has cultivated over her lifetime.   Special thanks to the following friends and caregivers who cared for and supported her in her final years: Father Tom Collins for providing spiritual comfort; Clarissa and Jon Westenburger for their loving friendship and support and Stacy, Scotty and Monica for providing so much care and assistance. Special thanks to her caregivers who have provided so much loving care and comfort including Charlene and Tammy, Lesset and especially Billy Jean and Ginny who lovingly cared for her during her final months.

A mass will be held for Karen on Tuesday, November 12, 2019 at 3:00 at the Shrine of the Sacred Heart, 1499 Shady Lane, Hot Springs, VA, 24445.  At her request internment will be private. Cards of condolence may be sent to her mother Gloria Cobb and her brother Richard and Jean Cobb at 306 Eakin Street, SE, Blacksburg, VA, 24060. Memorial contributions may be sent to the Shrine of the Sacred Heart or to one of Karen’s many charities, Caring for Creatures, 352 Sanctuary Lane, Palmyra, VA, 22963. VERBUM SAP SAT.