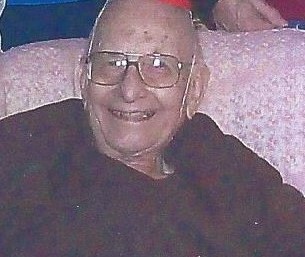 He was born November 10, 1919 in Bacova, Virginia, the son of the late Jesse Pursley and Lena Violet Broce Pursley.

Mr. Pursley was a retired Post Master in Bacova.

He was a veteran of the U.S. Army having served during WWII.

He was an avid Washington Redskin fan. He loved the outdoors and enjoyed fishing and hunting. Marvin loved animals and enjoyed watching them.

He was married to the late Marie Hiner Pursley who preceded him in death on August 25, 2013.

In addition to his wife, he was preceded in death by 2 brothers, Virgil Pursley and Curtis “Abe” Pursley; and a sister, Edna Osborne.

A funeral service will be conducted at 11:00 a.m., Friday, October 14, 2016 at McLaughlin & Young Funeral Home with Pastor Dick Boyer officiating. Interment will be in Mt. Grove Cemetery.

Memorial contributions may be made to Bath Animal Welfare, Box 716, Hot Springs, Virginia 24445.