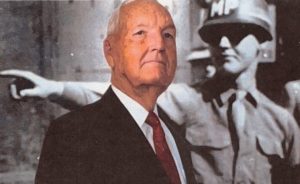 Neil Gordon Corbett, passed away peacefully at his home at Celebration Village in Suwanee, Georgia on December 9, 2022.  Having been born in Hot Springs, Virginia on February 18, 1927, he was just two months short of his 96th birthday.  Mr. Corbett was married to the late Alice Estelle Soper Corbett who preceded him in death on April 19,2022.

Mr. Corbett attended high school in Bath County and went on to serve in the U.S. Army in World War II where he was stationed in France and Germany.  Mr. Corbett, a Military Policeman, had the task of driving German prisoners to their trials at Nuremberg.   After returning home, Mr. Corbett attended Bridgewater College.  While at Bridgewater, he met and married his wife, Alice. Mr. Corbett worked for International Salt Co. where he rose from the job of Territory Sales Manager to Vice President of the Consumer Products Division.  He believed he was a prime example of The American Dream.   Neil was an accomplished golfer recording several “hole in ones” and maintaining a single digit handicap for many years.  He enjoyed spending time with his wife, children and grandchildren teaching them the joy of the game of golf.  Neil and Alice traveled the world to play golf in their later years and enjoyed their membership at Woodmont Country Club in Canton, GA. The Corbetts were longtime members of the First United Methodist Church in Cumming, GA.

A private family graveside service will be conducted at Warms Springs Cemetery.